Parts of a Folding Fan

Filet: Thumb piece attached to the guards at the pivot pin/rivet that acts as an ornamental reinforcement

Gorge: The part between the head and the leaf.

Guards: The two outer sticks, normally thicker and stronger than the inner sticks and sometimes highly decorated, that act as protection for the closed fan.

Head: The lowest part of the sticks and guards through which the pivot pin/rivet passes to operate the opening/closing mechanism.

Leaf/Mount: The part above the gorge, made from pleatable material and fixed to the ribs. Typically, it might be made of leather, paper or a wide variety of textiles, including lace. 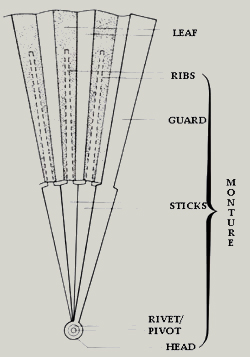 The anatomy of a fan

Loop: Attachment to the pivot pin/rivet which allows the fan to be hung from a ribbon.

Monture: The skeleton of a fan, i.e. the sticks and guards ‚Äď the support for the leaf. Typically, it might be made of ivory, tortoiseshell, mother-of-pearl, bone, sandalwood, fruitwood, lacquer, metal or plastic.

Ribs: The upper part of the sticks, onto which the leaf is mounted.

Pivot Pin/Rivet Pin, normally made of metal, inserted through the head which holds the sticks together and allows the fan to be opened and closed.

Shoulder: The part where the gorge and leaf meet.

Sticks: Rigid supports inserted between the two outer guards onto which the leaf is attached.

Washer: Small circular filler piece inserted between the guardstick and the pivot pin/rivet.