û lãanglaise: A single leaf mounted so that the ribs are visible on the reverse.

û la cathedrale: A leaf with points at the top of each stick, resembling church spires.

û la sultane: A leaf that is mounted so that one or more sticks are visible on the obverse of the leaf.

Art Nouveau: Artistic style, characterised by its naturalism and sinuous shapes, that flourished between 1890 and 1920.

Art Deco: Post World War I artistic style inspired by the combination of traditional crafts with new developments in technology.

Baroque: Ornate style, characteristic of the period from approximately the mid 17th to the mid 18th century.

Canepin: Fine lamb or kid skin, or an imitation of them.

Cartouche: An illustration within a border on the leaf. 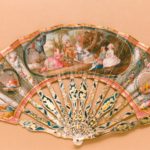 Catgut: Fine threads of a natural fibre twisted and treated with a stiffening coating, or synthetic material resembling it. 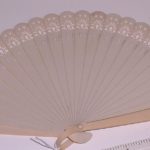 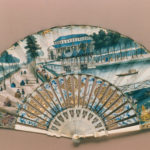 hat recurred at various periods between the mid 17th and late 18th centuries. 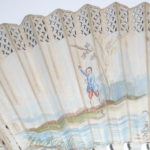 Directoire: Artistic and fashion style typical of the last five years of the 18th century in post revolutionary France.

En camaû₤eu: A leaf painted entirely in shades of one colour.

Gouache: Water colour paint made opaque by thickening with gum or honey.

Grisaille: Painting in monochrome, usually in shades of grey.

Leather: Animal skin (parchment, vellum, etc.) that has been treated and prepared to make a fine fan leaf.

Mica: Mineral with thin crystal layers that can be peeled off in fine transparent leaves.

Neo-classical: Late 18th and early 19th century artistic style based on the revival of the spirit and forms of classical antiquity.

Obverse/Recto: The front of the fan.

Parchment/Vellum: Animal skin treated to make a material suitable for writing or painting.

Print: Impressed image achieved by a variety of different 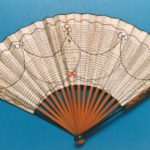 Reserve: The outer parts of the leaf decorated with motifs separate from the principal design.

Rococo: Mid 18th century ornate artistic style characterised by its lack of symmetry and a frivolity absent from the Baroque that preceded it.

Reverse/Verso: The back of the fan. 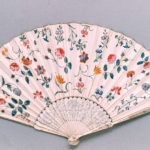 Shibayama: Inlay work, often carved, applied to a base material from which it stands out in re

lief. Named after an 18th century family of Japanese craftsmen.

Takamaki-e: Technique similar to hiramaki-e but with a raised surface (Japanese).

Tinsel: Glittering metal strips mainly used under the guardstick as a background for carving.

Trompe lãoeil: A painting that deceives the eye into thinking it is three-dimensional.

Vernis Martin: Imitation lacquer named after Guillaume and Etienne-Simon Martin who invented the process in the 18th century. 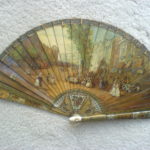 Vignette: Secondary illustration on the leaf.