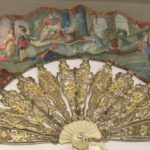 BATTOIRE:┬Ā┬Ā A folding fan with wide sticks, its shape resembling a tennis racquet.

BRIS├ē:┬Ā A folding fan comprised solely of sticks and guards, the sticks held by a ribbon at top and a pivot pin/rivet at the base. 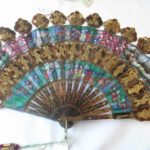 ng fan with two or more concentric leaves set one above another and resembling a section of the wheel of the cabriolet horse-drawn carriage.

COCKADE: A folding fan, either bris├® or with a leaf, that opens 360┬░, often with extended guards that form a handle. 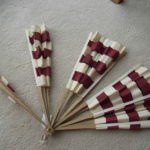 DISLOCATION:┬Ā A trick fan designed to fall apart when opened in the reverse direction.

FLABELLUM a (pl) A fan used in medieval times in church to keep insects away from the consecrated eucharist. It was made of metal, leather, silk, parchment or feathers. 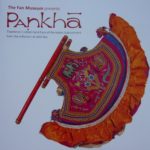 FLAG FAN:┬Ā A fixed fan with the handle on one side, resembling a flag.

FOLDING FAN: A fan that opens and closes from a head. 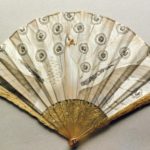 FONTANGE: A folding fan with a rounded, arched leaf that is taller at its centre than at its guards. Named after a high headdress popular at the turn of the 17th and 18th century, particularly in France. 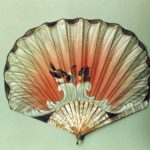 GUNSEN: A Japanese folding fan used as a signal in war. Typically having metal guards, the leaf features a sun on one side and the moon on the other. 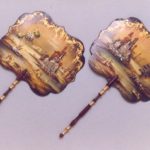 HANDSCREEN (FIXED FAN): A rigid screen attached to a handle with no folding mechanism.

PALMETTE: A folding fan with individual leaves attached to each stick, held with a thread. 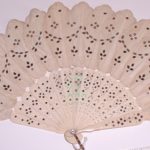 TELESCOPIC:┬Ā A folding fan with a mechanism that allows the sticks to slide into the ribs when the fan is closed. 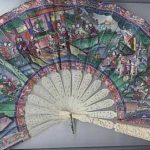 TESSEN:┬Ā A Japanese metal bar designed to look like a folded fan that was used as a protective weapon.