For fashion the beginning of the 20th century started much like the beginning of the 19th century. Fashion had come full circle. Once again women were wearing light, layered clothing, delicate in colours, beaded and flowing. Fans had also once again shrunk in size. They were now about half the size they had been in the 1880s. 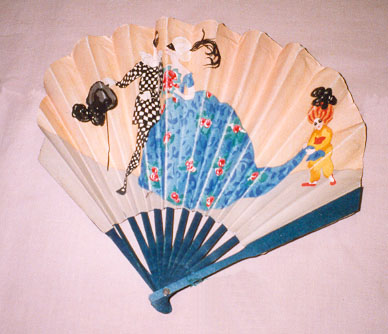 Leaves of fans reflected the clothes they were meant to harmonise with. For evenings sequins were favoured. They flashed off gas light like diamonds. Often these sequins surrounded a vignette of love, often in an 18th century pastiche. These scenes were more often than not painted on silk surrounded by mesh, or on fine vellum. For at this point much of the craftsmanship the last century had developed was still to be found in the fans being produced in the upper end of the market.

For day time, paper and silk leaves were popular with 18th century pastiche or flower themes, usually in pastel colours. There is a marked difference between the fans of the lower end of the market and the upper. The cheap fans often have painted wooden sticks, and rarely stand up to a great deal of use. However, among the cheaper fans produced were advertising fans. These were produced by all of the great hotels of the era and many of the fashion designers. These often display a startling originality and variation of themes and are very collectable today.

The first World War destroyed all this elegance, and much of the need for the accessories that accompanied it. For the duration of the first World War fans effectively vanished.
At the end of the first World War “society” recommenced but the world had changed. Women, for the first time, had been forced to fend for themselves at home while their husbands, fathers and sons fought the war. In many cases their loved ones never returned. The leisured lifestyle that permitted time for balls etc before the Great War had vanished in many cases never to return, and many women were reluctant to give up their new found freedom and access to money of their own.

The 1920s were the last gasp of the fan as a serious fashion accessory. Some beautiful art deco fans were produced, mostly as advertising. Feather fans, and sometimes “thousand face” mandarin fans are found in the fashion plates and photos of the period. Women’s hands however were no longer as free as they had been in the past. They began to be filled with the new fashions for smoking and cocktails. Fans were a nuisance when trying to clutch these items and look sophisticated, and increasing they were left aside. Simultaneously electric fans were available to cool the room. 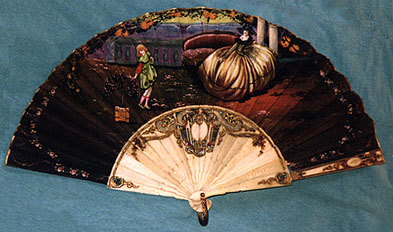 From the 1930s onwards fans had vanished as a popular accessory. They were relegated to “grandmother” items. Used as props for glamorous and exotic film star photos and weddings, but rarely getting an outing otherwise, and the craftsmanship was only a shadow of the past. They were more closely associated with the Far East and the Victorian age than the current century.

The fan’s survival in the latter part of the 20th century and the 21st century has been principally as an advertising gimmick. Even advertising fans, however, are not produced to the same level of quality or art work as those at the beginning of the 20th century. Fans are still used in Asia. China still produces cheap fans in large quantities and Japan also produces traditional fans of quality and Kyoto is still famous for these items. Most 20th century fans were made for airlines as advertisements. 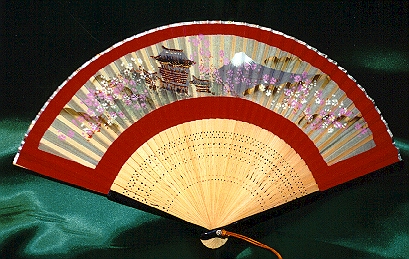 The Far East has always had a different attitude to fans than the west. Fans, in Asia, have been seen for centuries as an art form of great merit, and this is what has preserved the skill in fan making in those countries. However, in the west the fan was seen as a frivolous accessory, a pleasing, beautiful, expensive item. Its preservation was not assured because, especially in Europe, its use was not linked to climate (except in countries like Spain), and it was not seen as serious art. For this reason, although great heights were reached in previous centuries as an art work, these skills are all but lost now. It is doubtful if anyone alive could now make the great fans of 18th century Europe and China. If for no other reason, these fans should be treasured as a great beauty lost to us today. The world is a lesser place for letting these skills of human imagination and beauty die.

This website uses cookies to improve your experience while you navigate through the website. Out of these, the cookies that are categorized as necessary are stored on your browser as they are essential for the working of basic functionalities of the website. We also use third-party cookies that help us analyze and understand how you use this website. These cookies will be stored in your browser only with your consent. You also have the option to opt-out of these cookies. But opting out of some of these cookies may affect your browsing experience.
Necessary Always Enabled
Necessary cookies are absolutely essential for the website to function properly. These cookies ensure basic functionalities and security features of the website, anonymously.
Functional
Functional cookies help to perform certain functionalities like sharing the content of the website on social media platforms, collect feedbacks, and other third-party features.
Performance
Performance cookies are used to understand and analyze the key performance indexes of the website which helps in delivering a better user experience for the visitors.
Analytics
Analytical cookies are used to understand how visitors interact with the website. These cookies help provide information on metrics the number of visitors, bounce rate, traffic source, etc.
Advertisement
Advertisement cookies are used to provide visitors with relevant ads and marketing campaigns. These cookies track visitors across websites and collect information to provide customized ads.
Others
Other uncategorized cookies are those that are being analyzed and have not been classified into a category as yet.
SAVE & ACCEPT
Powered by