China has probably the longest historical record of continuous fan making in the world, where fans are used by both men and women. Shan is the general term for all Chinese fans, however, China has many varieties of fans, each with their own name. The earliest written reference to a fan in China is in AD 121 where reference was made to a large leafed plant which was used as a fan.

In the first Chinese dictionary, complied in the 2nd Century AD, the fan is also interpreted as a door panel that hung from the ceiling. This type of overhanging fan in later years became known in the south as the Chuke fan. By then it was pulled back and forth by means of strings attached to two foot-boards, operated by an attendant. This type of ceiling fan was used right to the late 19th century in the tropical south until the introduction of electric fans.

The Yu-Shan or feather fan, was another early type of fan. Made from the feathers of a variety of birds they are listed as goose feather fans after the most common kind of feather used. However, feathers from pheasants, peacocks, cranes, falcons and hawks were considered more noble choices. A hair fan was also used. Introduced around 265 AD the fan-shaped duster was made of long animal hair, such as from the tails of deer and horses, this fan was traditionally used by men of distinction as a status symbol. Members of the ruling class were often represented with fan shaped dusters in their hands. 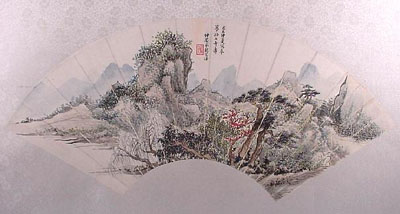 The use of large and long handled fans, generally held in pairs in imperial processions, is recorded from the 11th Century BC. These Staff or Screen fans were generally made of feathers or some other luxurious material. Together with banners and other insignias, they were part of the decorative ceremonial equipment of the royal retinue. For everyday use, fans were woven of plant fibres and were called Pien-Shan, the simplest being palm leaf fans and bamboo fans. Names of these domestic fans are found in literature of the 1st Century AD and have continued to be made to the present day.

From an early point in Chinese history the fans of China have been noted for their exquisite workmanship or for the works of art painted or inscribed on the leafs. These type of fans are generally circular or oval in shape, although some are hexagonal or square, with a central rib support extending down to become the handle. Referred to as Wan-Shan the surface of the fan may be made of brocade, embroidery, lacquer or other fancy and delicate materials, while the handles might be made of ivory, gold, silver or precious woods. With painted or inscribed fans, the surface was always made of plain white silk or decorated paper. 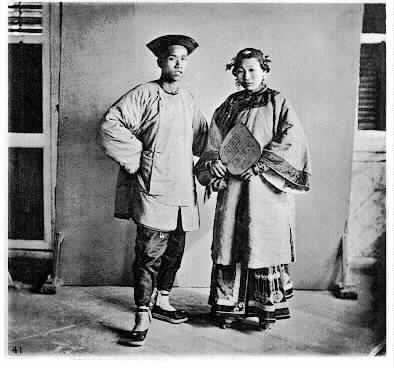 The practice of writing or painting on fans is recorded very early. The consort of the emperor Ch’eng of the Han dynasty in 33 BC wrote lyrics on fans. By the Sung dynasty (960-1279 AD) painted circular fans became popular in Court circles and court artists, including emperors are recorded as having painted these type of fans and they became known as ‘palace fans’. These fans were so treasured for the art works that many were immediately dismounted from their frames and mounted as album leaves, a practice which has fortunately preserved many of them to our time.

Stiff circular fans and feather fans were introduced from China to Japan in about the 6th Century. Traditionally, the folding fan was a Japanese invention that was introduced into China during the Sung dynasty (960-1279 AD). The Hi-Ogi type of folding fan that was introduced during this period from Japan and Korea was made from slips of Juniper wood, joined together at the top with a thread and tied together at the other end so that they opened in a radiating fashion. The oldest surviving paper folding fans date from around 1188 and can be found in Japan. This roughly corresponds with the Song dynasty in China.

The term for folding fan in Chinese is Che-San. Kuo Jo-hsu in the late 11th century commented about folding fans in his book on painting:

“The Korean envoys in China sometimes gave folding fans as personal presents. These fans are made of (dark) blue coloured paper. Paintings on the fans are figure objects, dignified men and women strolling or on horseback in the countryside.”

“There are riverbanks and streams in gold, lotus flowers, trees and waterfowls all ingeniously rendered in this decorative metallic style. There are silver tones appearing like mist and moonlight with is extremely attractive. These originated in Japan and are known as Wo-Shan (Japanese fans). In recent years they dropped out of sight are rarely found in the market.”

Folding fans were known to the upper class of the Sung dynasty, but were still regarded as rarities. In the subsequent Yuan dynasty, people were amused by foreigners who used colourful folding fans. Chan Pi (1425-1487), a well known calligrapher, observed that folding fans were only carried by labourers and courtesans, but he also witnessed folding fans becoming popular and being accepted by respectable society. One of the main reasons for change was that during the reign of Emperor Yung-lo (1403-125) Korean envoys once again introduced folding paper fans to the court. The emperor found it convenient to carry one around, and made copies and inscribed the fans, as the emperors of the sung dynasty had done, distributing them as gifts to high court officials. This naturally raised the status of the folding fan, eventually sweeping the whole nation and lasing to the present day.

By the 15th and 16th centuries, literati artists active around the lower Yangtze river, quickly took up the art of the folding fan. The type of folding fan artists preferred was generally about 12 inches to 14 inches long, including the ribs. More than half, an average 7-8 inches, was covered by the mounted paper. The most common materials of which fan bones were made of were bamboo, but others made of fragrant woods such as rosewood, boxwood and Chi-Chi Nan-cedar and rattan from Chekiang were among the most desirable materials. On occasion, iron ribs were used in fans by military people. Carved ivory and whalebone were used for women’s fans at a later date. The two guard sticks were often elaborately decorated with lacy carving and inlaid woods and simply designed bamboo engravings had a long history, but it was not until the mid Ming dynasty around the 16th century that artists began to sign their names on their works. 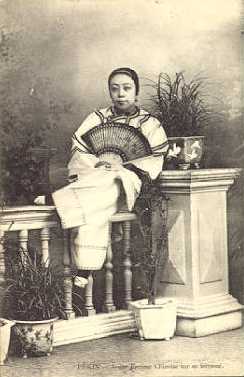 The coverings of folding fans quickly became weak and worn from repeated use. However, since the fan bones and ribs usually remained in good condition, they were often remounted with new paper year after year. In fact, the value of fan bones was enhanced by the aged patina from handling. The paper used on fans was pasted to toughen it and make it water resistant and the majority of Ming fans were covered in solid gold leaf or flecked gold which made the paper even more non-absorbent. The paper surface was slick and the artist had to handle his brush with care. Ming artists believed that painting was meant to express ones personal views and idiosyncrasies, that art projected itself and that was the most important part of his art work. Maintaining a scholarly student attitude to painting did not mean the slavish copying of old masters but rather capturing the spiritual essence of works that were being studied or learnt from.

The Manchu or Ch’ing dynasty ruled China for nearly 300 years (1644-1912). The different ethnic background of the Manchu’s caused many cultural problems at first, but the hostility lessened as soon as the Manchu rulers adapted to Chinese culture. The new imperial court fully supported the artistic traditions of the previous Ming dynasty. From the 17th century calligraphic art took on a new vigour and brushwork became more articulated. Fans continued to be painted in large numbers, following the traditions developed in previous centuries, but the art of fan painting became largely static and commercialised and lacked in many cases a great number of outstanding names, such as were produced during the Ming and early Ch’ing dynasties. 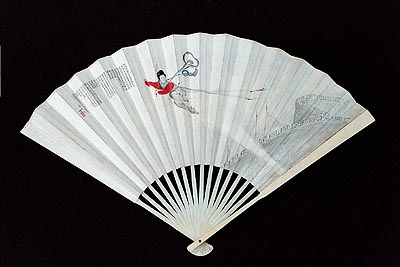 Most surviving fans from the Ming and Ch’ing dynasties show little sign of wear because from the 15th century onwards fans were respected and mounted in albums, just as were the round palace fans of the Sung dynasty. They became collectorsâ€™ items even in the time they were made. Aware that their fans were not simply used and discarded, but collected and appreciated, the fan painters expanded their creative abilities in poetry, painting and calligraphy to their utmost. In no other art were the Three Excellences of Chinese art – painting, calligraphy and poetry – so significantly and successfully entwined as in the folding fan.

The 18th and 19th centuries in China also saw the production of fans solely for the export market. Beautiful in their own right many people do not realise that these fans were made by the Chinese to cater for ‘barbarian’ tastes and were not used by the Chinese themselves. A perfect example of this sort of art would be the ‘thousand face’ or ‘mandarin’ fan that still often comes up for sale in western markets. Also for export the Chinese excelled in exquisite ivory, Sandalwood, mother of pearl and tortoiseshell carved brisÃ© fans. The early ones often have the delicacy of lace and have the initials of the buyer carved into the ‘leaf’. In 1906 The Ch’ing dynasty ended after the blood, chaos and looting of the boxer rebellion. A republic was declared, but by this time “The old China trade”, of which fans had been one of its specialties, had been consigned to the history books. The years between the end of the last dynasty and the founding of the modern Peoples Republic of China were ones of chaos and rebellion in China and they left their mark on the arts.

In the 20th century the Cultural Revolution in China had the greatest impact on fan production. It swept away the literati traditions of previous centuries as bourgeois and destroyed much of China’s rich cultural history. In the 20th century there have been artists who have revived previous traditions, but they are few and far between. Many ancient forms of fans are still produced, but mostly on a commercialised, factory made basis. The most common modern fans coming out of China are printed fans. In the 1950-70’s these tended to have ‘great-march-forward’ themes. They are often found with ‘traditional’ Chinese landscapes with red flags and trucks prominently featured in the landscape. Another common type is the modern pien-mein. This is usually in the form of sheer silk stretched over a frame with a simple picture painted on the silk. These do not have any of the artistic value of past centuries and are often easily broken. The last common form of export fan is cockade fan that once again has a printed ‘traditional’ leaf that closes up to a black metal guard stick/handle. This means that while china still produces fans in a large number they are only a shadow of a rich and long history.