The 18th century saw the first golden age of the fan in Europe. During this period they gradually went from being solely owned by the very rich and fashionable to being an essential fashion accessory for virtually all classes. For the first time printed fans started being made en-masse for those unable to afford the luxury painted and jewelled fans of the aristocracy and court. Fans were used on an everyday basis by all classes as an indispensable accessory. Many of surviving fans were wedding gifts to the bride and kept safe by the bride. These fans usually depict scenes of love, either famous historical weddings in the Baroque period, or arbour scenes with sacrifices to Hymen, the god of love, in the Rococo period. 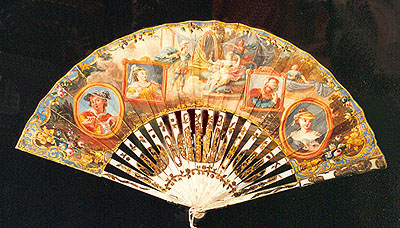 Many more fans survive from the 18th century onwards, and the chief way of dating and attributing all painted fans is by the style of painting, that is by trying to compare them with watercolours, portrait miniatures and oil paintings that have already been ascribed to a country of origin and date. There are many things which make this difficult. Fans were widely manufactured and traded between various countries. There was also much importing of fan parts. As in oil painting, a fan leaf was not necessarily painted by one person alone. There are several examples where the border appears to be Chinese and the central design European.

At the turn of the century, there is little to distinguish the painted folding fans with leaves of the early years of the 18th century from those of the 17th century. This is because the Baroque period of art was still dominant, as it had been from around 1660. Until around 1735 they would continue to vary between three types. The first is a very long fan, about 30.5 cm (12in), painted on a coarse kid leaf with a wide span of nearly 180 degrees, and painted all over with a rather loose but well-balanced composition normally incorporating fat putti (cherubs), in bright colours often enhanced with gold. These fans have rather heavy tortoiseshell sticks with sparse decoration. In fact, the sticks are almost always identical in shape, although sometimes of ivory rather than tortoiseshell. They probably come from the same source.

The second type of Baroque fan is far superior in quality. It is almost certainly French and depicts very elaborate scenes filled with figures- all well painted. Their costumes in particular are superbly handled. As the previous type, they are painted in bodycolour, usually on a dark ground, but on a thinner kid leaf of the type called ŌĆ£chickenskinŌĆØ. These all tend to be longer than the fans of the next few decades.

The third type is of mica and much smaller in size than the previous two categories. Several examples of this type are known, and they can be found in the Brompas and Messel collections. The fans echo the construction of the late 16th mica fans. Each slice of mica is painted with a brightly coloured jewel-like miniature, a figure, a bust with elaborate hairstyle, an animal or flowers. These too were probably French.

In addition to these folding fans one other type of fan was very popular in this period. These fans are traditionally (but inaccurately) known today as ‘Vernis Martin’ bris├® fans because of the glossy varnish covering the sticks. These fans do not in fact use ‘Vernis Martin‘ varnish to cover their sticks so ‘varnished’ is the more accurate term. These fans were made in Holland, England and France from c1650-c1730. They do not have a ‘leaf’, but consist solely of ivory sticks which have been painted in oils, often in Classical scenes or scenes from the orient. To hold the fan together there is either a tough thin cord, or knots of fine silk or a decorated silk ribbon at the top of the fan. These fans are today very delicate and under no condition should they be washed. The decoration would just vanish. Many of these fans have either a delicate painted scene, similar to their cousins with a leaf or have a bright, heavily gilded design on them often with the backs showing a pale outline version of the front of the fan. 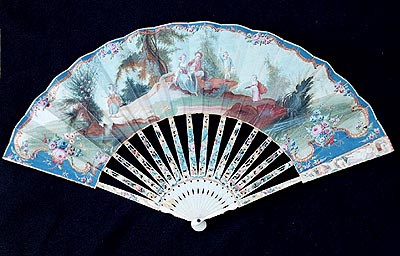 In the 1720s, the fan makers, despite their enormous success at the top of the market, found it necessary to expand their trade and produce cheaper fans in bulk to appease an ever-increasing public demand. In order to do so, they began printing the leaves – they could then duplicate their designs and their products could be sold cheaply at fairs on stalls and booths, thus undercutting the cheap Chinese fans that were swamping the market at the lower end. These fans are often used to commemorate events. Being cheap and ephemeral at the time they were not often kept. Their sticks were often only plain wood. As many of these fans are rare, their value often rivals other important fans in price today.

From around the 1730s onwards we also have lace fans which have survived. All of these fans have hand made lace. A great luxury item, because of the time and skill involved in making it lace was, like pearls, a prestige item. Many of the very early surviving lace fans have ‘Renaissance’ style lace, often made of ultra-fine flax thread. This type of thread, only .09mm in diameter was made from c1650 till the late 18th century. Many of the few surviving lace fans of the 1730s show Brussels lace leaves with scenes depicting figures, all these fans look similar in style, but show different subjects. Lace fans continued to be made right through the 18th century, although the style of lace used changed according to the fashion of the period it was made in. The Esther Oldham collection has a lovely lace fan, dated c1775 with Point d’Argentan lace which is believed to have been made for the wedding of a Princess of the house of Orl├®ans.

By 1753 the Association de Eventaillistes in France had recovered from the previous generation’s great loss to the art with the revocation of the Edict of Nantes, and had 150 members. In England, the fan trade became organised too, and in 1709 the Worshipful Company of Fanmakers was granted a charter by Queen Anne, the last purely trade city company to be formed. The company’s motto is ‘Arts and Trade Unite’. The company today is better known for the products it manufactures for its association with the air-conditioning industry.

Whilst England and France were exporting many fans, they were also importing a large number, particularly from the east at the turn of the 17th and 18th centuries. The Chinese taste was in vogue. European fans from the beginning of the 18th century often show influences of the Chinese taste, particularly on bris├® fans. At around 1735 fan sticks become neater and are often clout├® (studded) with mother of pearl plaques. The fans also became a little shorter. 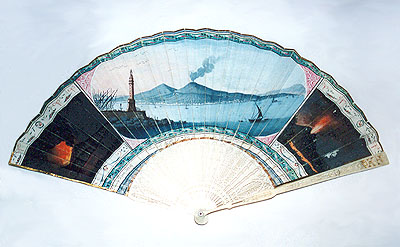 In Italy, the main subjects were classical, often taken from famous Roman paintings. Thus they were very suitable gifts to bring back from the Grand Tour. The ‘Grand Tour’, was a ‘must’ from the mid 18th century onwards, and these fans are often on very fine chickenskin. In France, in the 1730s as the taste shifted to Rococo, the subjects on fan leaves changed to the pastoral and romantic. The leaves now span out to almost a semicircle, having been about 120 degrees at the beginning of the century. They are now always painted on light grounds and the sticks have become much more important and decorative. These are predominantly of ivory or mother of pearl and elaborately carved.

In England, the topographical fan appeared around 1740. In Holland, at the time, leaves were painted with pastorals scenes, often very finely drawn and predominantly in tones of pale greens and blue. These fans were fairly small but later, about 1740 they span wider. In Venice, fans remained large, ‘a grand vol’. During the 1760s the shape and design of fans change. They are now normally arranged with one large and two smaller vignettes. The finest French fans are exquisitely drawn and tend to be more sombre in colour than those of other European countries. The cheaper French fans are usually painted with dumpy figures with round pink faces. The English fan can be distinguished by their fine carved ivory sticks: using bleaching their sticks were softer and whiter. The leaves were often imported, but home-made leaves show bright colours, and the reserves were decorated with large floppy peonies, often outlined in gold. England was also the biggest makers and exporters of printed fans. 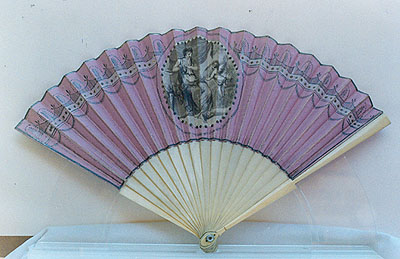 Typical French fan subjects of the time were pretty groups of lovers, sacrifices to Hymen, families and shepherdesses. In Holland a similar arrangement of three vignettes is deployed but leaving much more blank background. Most Dutch fans, however, have Biblical and pastoral subjects. Fans were used in church, where respectable women prayed behind their fans, whilst men used their hats. The Biblical fans were mainly Old Testament, those of the New Testament being considered idolatrous. A fashion for trompe l’oeil fans emerge in the 1760. These are painted with a medley of drawings, pictures, jewels and lace. Signatures are normally disguised by being on one of the paintings. After 1777-8, when the guilds had been reformed, members of the association of fanmakers were permitted to paint flowers and embroider on the leaves of fans, which lead to a reduction of the numbers of figures and an increase of embroidered ornament.

In Italy, from the 1770s onwards most fans were painted with classical ruins, with reserves in Pompeian decoration. There were also dramatic views of Vesuvius erupting and of the bay of Naples. In France, from the last quarter of the 18th century until the Revolution, there are a number of very pretty fans, often painted on silk. Some are painted with figures in a park or garden, dressed at the height of fashion, sometimes playing at shepherdesses as Marie Antoinette loved to do at Petit Trianon. A number of fans from this period commemorate balloon ascents, they are very much sought after. But from this moment until the restoration France did not produce many more painted fans. Cheap printed fans with political slogans were popular during revolutionary times. France then, soon after the Revolution, led the field in of the finer printed fans at the turn of the century. Under Napoleon small silk, tortoiseshell and ivory fans, often decorated with spangles were cheaper and popular. A few quality fans had articulated sticks, where carved figures can move. A new type of rigid fan, the handscreen, was made, usually with a printed leaf and simple sticks.