The 19th century displays one of the widest varieties of fans produced over the centuries. Fans of every sort can be found in the period from 1801 to 1900, from splendid specimens that equal the best of previous centuries to home decorated examples that were popular from the mid 19th century onwards and promoted as a ‘lady-like’ hobby. 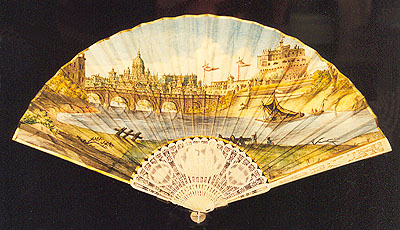 At the beginning of the 19th century, fans, after their heydays through the 17th and 18th centuries were in a period of decline. With fashion, ‘simplicity’ and rusticity were the order of the day. Fans became very dainty and were often no longer than the size of a personÔÇÖs palm, as dresses were slimmer and had smaller pockets. The most popular materials were silk and sequins, ivory and tortoiseshell. When ivory or tortoiseshell were used they were often pierced or inlaid with sequins. While presenting a beautiful and delicate facade, these fans were not very practical when it came to cooling a person down and their main function was as a ‘necessary’ accessory or as an accent to modesty or flirtation. The finest ivory carving was done in London; printed leaves with stipple engravings printed in colours were a Parisian speciality.

By around 1825’s the ‘Grecian’ fashion of the early 19th cent was on the decline. Waistlines dropped and fabrics became heavier. As fashion became more complex and heavier, so did fans. From around 1825 to 1840 the fans produced were larger than in previous years (around the size of the ‘normal’ fan today). The subjects on leaves represented the romantic revival that was taking place. There are boating parties and nostalgic looks at the 18th century. Other fan subjects are taken from popular literature, songs and plays as well as topical or commemorative themes. The colours used reflect those of fashion, with a combination of pastel and bright colours in contrast predominating.

From about 1840 to 1870 fans were made that had leaves and sticks in a fairly equal balance. These fans were made to go with the large crinoline dresses that became popular during this time. Romantic lithographic prints were popular as well as scenes of people dressed in 17th and 18th century style and historical scenes. These pictures were usually enhanced with watercolour, and often these fans have a leaf that has its edges near the guard sticks printed with a metallic gold edging designs. The overall effect of these fans can be one of brightness and strong colours. The sticks are often elaborate, like the leaf, and made of mother of pearl, ivory, bone, lacquered wood or papier mach├ę. They too, were mainly made in Paris.

The period of 1870-1900 saw fashion slim down from the bell skirts of the mid 19th century and the bustle become the new fashion statement. If anything fashion had become more complex, with numerous drapes and beads being used to finish off garments. Fans began to be made as part of an ensemble, often a piece of fabric that a gown was being made of would be put aside, so that a matching fan could be made to complete the outfit.

One significant change during the 19th century was the huge number of patents filed for fans of varying degrees of elaborateness. These patent filings were a historical reality created as a direct consequence of both local competition and also of trade with China. This was also a period of numerous international exhibitions. The Crystal Palace exhibition was first held in 1851 and many fans, both exhibition fans, and advertising/souvenirs fans survive from both this and subsequent exhibitions held throughout Europe and America. In 1851 machine embroidery was first shown at the great exhibition. The quality of machine embroidery was soon able to compete with hand embroidery and by the 1870’s was a feature on many dresses and fans. 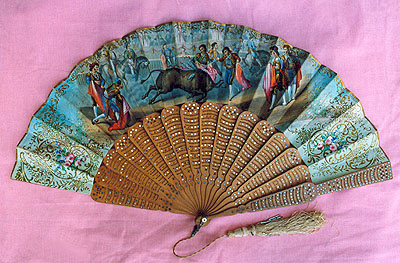 The huge mutton bone sleeves of the 1890’s were echoed with massive fans. When open some spanned up to 30 inches (76 cms). When held up today it becomes debateable as to how they were used. Their size makes wielding them an art form. However, that same size made them popular in the theatre where they supported the Japanese craze in fan dances. Postcards can still be found today depicting actresses of the period dressed in a kimono holding a huge Japanese fan in their hands.

By the end of the 19th century fashion had come full circle. As the century progressed the quality of fan leaf designs declined. The techniques and skills still existed to make high quality fans, such as the isolated instances of exhibition fans or when making the most costly fans, but even these might attribute their value more to jewels and even precious metals incorporated into the decoration than to fine manufacture. Even firms like Faberg├ę fall into this category, with fabulous jewelled sticks produced by the firm, but with often mediocre leaves produced by a secondary party.

The machine manufacture of fan sticks was perfected by Alphonse Baude in 1859. By the end of the century other manufactures were also using an improved version of the technique. However, this resulted in the mass production of fans that made the sticks of one fan virtually indistinguishable from another. All this served to make fans more affordable for the general public, but reduced the fan’s status from an art object to that of a mass produced one. This degeneration caused concern in art circles and exhibitions were organised in London from 1868 onwards with an aim to improve fan design. The two firms which dominated the higher quality fan production were in Paris, Alexandre in England Duvelleroy who were also the second biggest in Paris. Both firms made fans for royalty and their boxes are usually the sign of a good quality fan.

Aside from the folding fan, examples of rigid fans can often be found by collectors. These are usually referred to as ‘handscreens’ and were generally used indoors beside the fire or outside as protection from the sun to preserve ladies complexions. These types of fans were often produced in pairs for display on the mantle place above the fire. Decorations vary from ones made of feathers with stuffed birds in the centre (often hummingbirds and other small species – photos of Queen Alexandra and Princess Mary can still be seen with them holding fans of this description.), to ones decorated with scraps and embroidery.
By 1900 the huge mutton bone sleeves of the 1890’s were gone and art nouveau was making in impact. Fashion once more slimmed down to light fabrics and colours. Fan sizes also became smaller, not as small as at the beginning of the century, but the massive leaf sizes of the preceding decade were a thing of the past. Accessories still tended to be elaborate and fans were still made, often with sequins decorating a plain gauze fan leaf for the evening, or leaves with delicate painted romantic scenes and beautiful mother of pearl sticks. Fashion, and fans had come almost full circle by the beginning of the 20th century.
Sources:

We use cookies on our website to give you the most relevant experience by remembering your preferences and repeat visits. By clicking ÔÇťAcceptÔÇŁ, you consent to this use.
Cookie settingsACCEPT
Manage consent