“Such charming relics seem to elude time; many civilisations have risen and died away since that fan was deposited in this treasury. Such a rare, but in many ways familiar, object provides a link between us and that tremendous past. It helps us to visualise that the young king must have been very like ourselves.” – Howard Carter

In Egypt’s hot, stifling climate the fan was a necessary piece of equipment, intended to provide shade as well as a cooling breeze. Tutankhamun was buried with eight – a single hand held example and seven mounted on stocks of varying lengths for operation by courtiers. In Ancient Egyptian these fans were called ‘shuwt‘, meaning ‘shadow’ or ‘shade’ and/or ‘seryt‘ meaning a royal or military standard. All are of the half-round, multi-feathered variety, and were distributed between the Burial Chamber, The Treasury and the Annexe.

The most remarkable of Tutankhamun’s fans was a small, (18cm/7in long) but exquisite rotating hand-fan of ivory found in a white painted wooden box in the Treasury. Its feathers, predominantly white with a shorter row of brown at the base, were preserved intact, and according to Carter, “as perfect as when it left the hands of the boy king.” 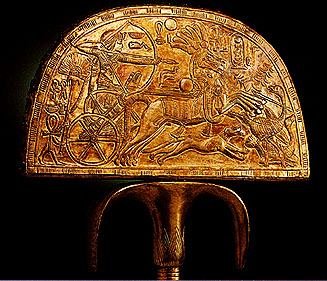 The first of the long fans (the ‘Golden Fan’) was deposited in the space between the third and fourth shrines, on the western side. Just over a metre in length (1.015m/3ft 4in), both the handle and the semi-circular ‘palm’ into which the feathers were originally inserted are covered with thick gold foil. Both sides of the palm are embossed and chased. The front shows a scene of Tutankhamun hunting ostriches, possibly the very ones that provided the plumes for this particular fan (see photo).  The reverse shows his triumphant return carrying the precious feathers under his arm while his attendants carry the slaughtered birds. Unfortunately, the feathers (42 in all were used for this fan, alternating white and brown), did not survive the destruction wrought by insects down through the ages. The vertical inscription down the length of the handle records the details of the hunt, which apparently took place in the desert near Heliopolis.

Fans of this type are often depicted in tomb paintings, and can symbolise the ‘divine presence’ of the Pharaoh. They were included in the tombs of royalty and influential people because the motion of the flabellum was thought to restore the breath of life to the deceased. They were also included for the comfort of the deceased in the afterlife, which they fully expected to be a continuation of their earthly existence, except in a more idyllic setting. These fans were also regularly carried by attendants in royal processions at court and in religious ceremonies, (their modern counterparts being the flabella borne in processions in Rome behind the Pope when seated on the sedia gestatoria). The main characterising features of these fans are the long handle terminating in a knob at the lower end and in a stylised papyrus or lotus flower at the top, a semicircular or elongated palm, and several long ostrich plumes (of a species which existed in Egypt till approx 150 years ago). They were used chiefly as sunshades.

The position of fan-bearer was considered to be one of the highest offices among court officials. In fact, so important was the title of Fan Bearer it was given to the king’s Viceroy, the trusted military commander in charge of the area of Nubia and the Sudan. The actual office of Fan Bearer was known as ‘tchay khuw’. One of the earliest individuals known to have held this office is Maiherperi (c1400BC). Raised in the Royal nursery, he was buried in the Valley of the Kings. His Fan Bearer title was of great importance, and the further designation of ‘Fan Bearer on the King’s Right Hand’ reflects a close personal relationship with the Pharaoh himself. The military connection with these office holders is strong and it has been suggested that these ‘fan bearers’ may have been part of the Pharaoh’s bodyguard.

Another type of fan, carried as a symbol of office, generally had a shorter handle and a single plume, called in Ancient Egyptian, ‘khuy‘, simply meaning ‘fan’. A single ostrich feather represented the Goddess Maat who was the personification of Truth, Justice and the Essential Harmony of the universe. Anyone holding the office was naturally assumed to embody these qualities. None of this type of fan was found in Tutankhamun’s tomb.
A second long handled fan (the ‘Ebony Fan’) was found lying on the south side of the innermost shrine. Its palm is similarly covered with thick gold sheeting and is decorated with inlays of lapis-lazuli, carnelian-coloured glass and translucent calcite, the king’s twin cartouches flanked by the protective wings of the vulture goddess Nekhbet. The long ebony handle is decorated at intervals with inlaid bands. The original feathered settings suffered extensive damage, but sufficient remained at the time of discovery to show that they had been set with 42 feathers alternating brown and white.

The five fans from the Annexe varied in length between 60.96 and 121.9cm (24 & 48in) and their materials ranged from stained and gilded ivory to wood with ornamental bark covering, and gold foil. Each had been fitted with 48 feathers (24 on each side). Where traces still remain it can be seen that the feathering had been stripped from the quills for part of the lower length, presenting a spoked effect. All except one, which carries prenomen and nomen of Akhenaten and the later form of the Aten cartouches, were inscribed for Tutankhamun himself.