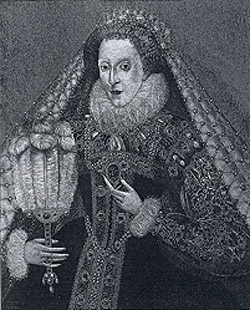 By the Renaissance fans were firmly established in European culture as a luxury item. Fixed fans were very popular in the early part of the 16th century and there are numerous paintings of royalty and aristocracy being depicted holding these fans. Most often they were in the form of a jewelled ping pong bat shaped handle, topped with exotic feathers. Many of these fans were listed in the wardrobe of Elizabeth 1st of England. Aside from being a fashion accessory fans were also used as a status symbol. John Aubrey, writing during the reign of Charles II recalled the fans of the Elizabethan age, describing them as such:
“The Gentlewoman then had prodigious Fannes, as is to be seen in the old pictures, like that instrument which is used to drive feathers: it had a handle of at least half a yard long; with these the daughters were corrected oftentimes. Sir Edward Coke, Lord Chief Justice, rode the circuit with just such a fan; Mr Dugdale sawe it, who told me of it. The Earl of Manchester used also a fan. But fathers and mothers slash’d their daughters in the time of that besome discipline when they were perfect women.”

It is worth noting from the above description that fans were carried by both men and women. If you look at the fan being held by Elizabeth in the painting on the left you will notice one of these feather fans being held. They are very reminiscent of the fans found in Tutankhamun’s tomb. This indicates a beauty and functionality that has withstood the test of time.

These fans would continue to be popular until the end of the 16th century when they vanished and the folding fan took their place in popular culture. The fixed fan would survive in Europe in the form of fire screens and not make a major revival until Victorian times. However, feather fans, especially ostrich feathers, would remain a fixture of court life right up until the 20th century.

In Venice the fixed fan took another form – that of the ãflag fanã. Titian and Tintoretto depicted Venetian noblewomen holding these fans. At first glance they look odd indeed. However these were moving objects and the rectangular part of the fan is meant to whirl around the stick which is held in the hand. These types of fans are still used in some parts of Asia, and they generate quite a breeze from a small effort.

The other type of fan that became popular in the mid 16th century was the folding fan. When most people think of fans it is the folding fan which first comes to mind, partly because they are still in use today, and because they are extremely practical. Elizabeth 1st, in her later portraits, was also depicted using these sorts of fans, and in fact there have been some survivals of these type of fan such as a rare English vellum and mica fan, Circa 1580, sold by Christies, June 1994. French sources for folding fans are earlier, and it has always been assumed that this ‘new’ type of fan had found its way there from Italy. Flag fans and the jewelled feather fans, like the one in Elizabeth’s portrait only exist in paintings today.

There are several types of folding fans, but the two principal ones are the pleated and the ‘brisûˋ’ fan. The pleated fan is composed of a shaped leaf or mount made from a variety of materials, placed over a set of sticks. The outer ones are thicker and designed to protect the inner sticks, and are referred to as guards. The base of the sticks may be rounded off or shaped and contains a pivot which holds the entire fan together. The brisûˋ fan consists of sticks only, held together at the top with a ribbon or cord and at the bottom with a pivot. Otherwise it functions exactly the same as a ‘normal’ folding fan. 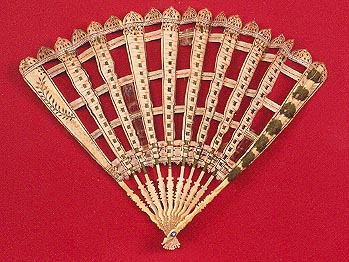 There is another English Mica and Vellum fan, from the same workshop in the collection of the Musûˋe de la Renaissance, Ecouen, France. It has roughly carved bone sticks, its guard sticks are decorated with little tufted pom-poms of cerise silk, and the leaf is one of vellum. The leaf is attached to the sticks using a somewhat crude method of sliding them through a series of small radiating horizontal slits; the effect is rather like sliding a hand into a glove, except that the sticks are allowed to show in between the slits. The leaf also bears rows of small painted mica insertions like little windows, which turned the fan into a fascinating ornamental toy. Tufted silk pom-poms were a popular decoration for the outer sticks during this period and they can be seen on the outer sticks of the fan held by Elizabeth 1st of England in the Ditchley Portrait, c1592, in the National Gallery in London.

At the beginning of the 16th century, fans in the Northern Hemisphere, were virtually unknown as a fashion accessory. By the mid 16th century feather fans were being carried in all the courts of Europe, and were on par with gloves as a gift to royalty. They were expensive ‘designer’ items, often made of gold and jewels, at least those that have survived in portraits. Towards the end of the century the folding fan appeared. Still a costly item, it gradually made its way around Europe. Most likely it was an innovation from the East, imported to Italy. Of these two basic fan types it was the folding fan that was to survive the end of the next century. However, construction techniques employed by European fan makers during this period were rather crude. Fans were still being experimented with and craftsmen still had to learn how to hone their skills to suit the scale of the object, for fans at this time were not large, being approximately 8 to 9 inches (23 cm) long, and opening out to about 16 to 18 inches (40-50 cms). Their comparatively small size meant that elaborate leaves and sticks would have made them awkward to handle. The coming century would see a great refinement in the manufacturing methods of these early folding fans.

We use cookies on our website to give you the most relevant experience by remembering your preferences and repeat visits. By clicking ãAcceptã, you consent to this use.
Cookie settingsACCEPT
Manage consent

This website uses cookies to improve your experience while you navigate through the website. Out of these, the cookies that are categorized as necessary are stored on your browser as they are essential for the working of basic functionalities of the website. We also use third-party cookies that help us analyze and understand how you use this website. These cookies will be stored in your browser only with your consent. You also have the option to opt-out of these cookies. But opting out of some of these cookies may affect your browsing experience.
Necessary Always Enabled
Necessary cookies are absolutely essential for the website to function properly. These cookies ensure basic functionalities and security features of the website, anonymously.
Functional
Functional cookies help to perform certain functionalities like sharing the content of the website on social media platforms, collect feedbacks, and other third-party features.
Performance
Performance cookies are used to understand and analyze the key performance indexes of the website which helps in delivering a better user experience for the visitors.
Analytics
Analytical cookies are used to understand how visitors interact with the website. These cookies help provide information on metrics the number of visitors, bounce rate, traffic source, etc.
Advertisement
Advertisement cookies are used to provide visitors with relevant ads and marketing campaigns. These cookies track visitors across websites and collect information to provide customized ads.
Others
Other uncategorized cookies are those that are being analyzed and have not been classified into a category as yet.
SAVE & ACCEPT
Powered by