One of the purposes of the FCI is to encourage interest in and knowledge of the fan. Though to many of us this would mean the history of fans, and of collecting and researching old fans, the FCI is also keen to sponsor interest in young people which may include modern design of fans. 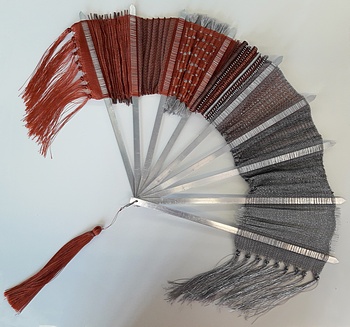 How do you initiate a fan-making competition? In the case of our publicity officer, she happened one Christmas Day to be seated at dinner next to a cousin of a friend in France, an Art and Design school teacher! This resulted in the 2017 FCI AGM being honoured with 17 entries fan creations from students at the √âcole Duperr√© in Paris.

The √âcole is a high level institution, which is well rated amongst companies who subsequently employ the best of its students. A lot of work went in from both the staff and French-speaking FCI members. The finished items were delivered to the AGM for our judges‚Äô deliberation.

This year we offered a further prize for the fan which ‚Äòspoke‚Äô the most to our members attending the weekend, not in any way a technical judgement, simply a vote the fan which most members would choose to own, thus the ‚ÄúMembers‚Äô Favourite‚Äù. A clear winner came out of that vote, a fan entitled ‚ÄúArchitectural Chrysalis‚Äù by Oph√©lie Adzic, who received a prize of 100‚Ç¨.

The winners also received certificates and four further entrants received Certificates of Commendation. All entrants received a participant‚Äôs certificate. These were presented by FCI President Drs Fransje Hovinga ‚Äìvan Eijsden on May 30th 2017 at the Ecole in Paris, in front of a group of both FCI and Cercle de l‚ÄôEventail members.

The four winning fans will be on display at the Exhibition in Saint Eustace France on September 23rd and 24th 2017.

The √âcole were delighted and impressed with the FCI competition, feeling that their students gained a great deal from participation in the event and from the input from all the members who visited.

The Fan Circle ran a fan design and making competition in association with our 2010 AGM in Leeds. We worked with 16-18 year old students at the Shipley College Art and Design department. Seventeen students submitted the fans they had made, some making several designs. The fans had to be made out of recycled objects. 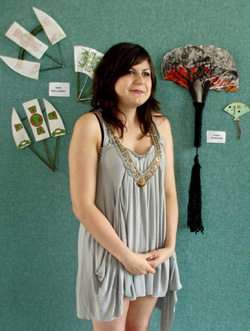 First prize winner was Vicky Peckover (see left) with a large striking fixed fan in the shape of a tree at sunset . 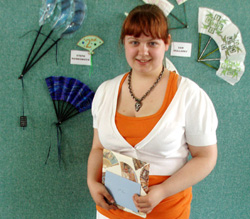 The FCI sponsored a competition in conjunction with the Glasgow School of Art to coincide with our 2002 AGM in that city. Students from both the Department of Silversmithing and Jewellery and the Department of Textiles took part in this competition, the work from which was exhibited between 18-25 May 2002. The main criteria was that the resulting object should be utilisable as a functional fan.

There was a large and high quality entry and the FCI awarded prizes to the winners. First prizes in the Silversmithing and Jewellery class were awarded to Julie Harvey for a cockade paper fan fitting into a silver holder on a necklace and to Al Morita for a blue and white cockade fan carved in cameo fashion. In the Textiles class, first prize was won by Ranli Weerasinghe for a rigid fan inspired by a dragonfly.

The FCI is always keen to hear from art and design courses who are interested in the fashion of the fan, and would be pleased to consider submissions for sponsorship of exhibitions. Note that these would normally be held in conjunction with our AGM.

We use cookies on our website to give you the most relevant experience by remembering your preferences and repeat visits. By clicking ‚ÄúAccept‚Äù, you consent to this use.
Cookie settingsACCEPT
Manage consent